Bella Robertson is the actor in the former American television series duck dynasty. The eighteen years old Bella (Duck Dynasty Star) shares her life inside with ET via zoom. In her interview, she talks about her engagement with Jacob back in November. They both dated for like 6 months and then decide to get engaged. They both are now fiancé. Moreover, she tells that how did Bella Robertson respond to her haters on her engagement.

Being a celebrity is sometimes not easy where you are getting so much love and respect for your profession but at the same time, there are some moments where you have to face certain criticism.

The best thing about a celebrity is they know how to handle any situation without getting hurt or hurting someone else sentiments. Because when you are a public figure you cannot stop people commenting on your personal life and choices. This is a hard reality to accept but undeniable.

How Did Bella Robertson Respond to Her Haters?

Everyone keeps on saying that she’s too young to get married. Then Bella told in her interview that she thinks a lot of people, and what they want to say like Jacob and I are dating for six months. But for them yes we are indeed dating each other for six months but we know each other for so long. She also adds. “And since quarantine is like dog years, we’ve been in quarantine the whole time we’ve been dating and we’re together all the time”.

She explains that first off, we’ve been only just friends for so long, we started dating because Jacob came home from college to be here in quarantine days. That’s been a game-changer and also a big factor in both of our lives. She continues. “I don’t know if normally I would have ever gotten engaged to someone right after six months, if we would have just met and started dating, you know it’s not normal? But on top of that all, in the south so many people get married so young normally. Like, my parents got married at 18, my brother got married at 18, my grandparents married at the age of 18. It’s very common around here so it didn’t really shock me too much about my age.”

What Does Bella Feels About Jacob?

The entire criticism aside Bella is happy to start living a happy life with her fiancé. It is the best feeling to describe Bella can’t be more happier and satisfy about the only thought of getting spend the rest of her life with the love of her life. That makes all senses at the end. She describes her feelings in such a way that it was a moment of surprise for me when Jacob took out the ring, as I’ve had no idea about it. That precious moment stuck in my memory. It was definitely was a huge surprise for me.

So the next day my mom asked me about did Jacob talk to you about our talk? She thought that Jacob must have told me but I said no which is actually true I didn’t even know anything, and how do I think about my own damn proposal. Then after that, I asked her what did he say to you guys and she ended up spilling the beans to me.

The news was first shared by Jacob Mayo the fiancé of duck dynasty star. He shared this news on Instagram along with a photo of many members of her family with a sweet caption. Mayo shared photos from the night when he proposed to Bella Robertson. He also adds those moments when she said yes. He wrote that Bella is everything to me, she is my best friend, she is the person I know I can lean on in any kind of problem with no judgment. She loves Jesus and Bella undoubtedly is my everything. 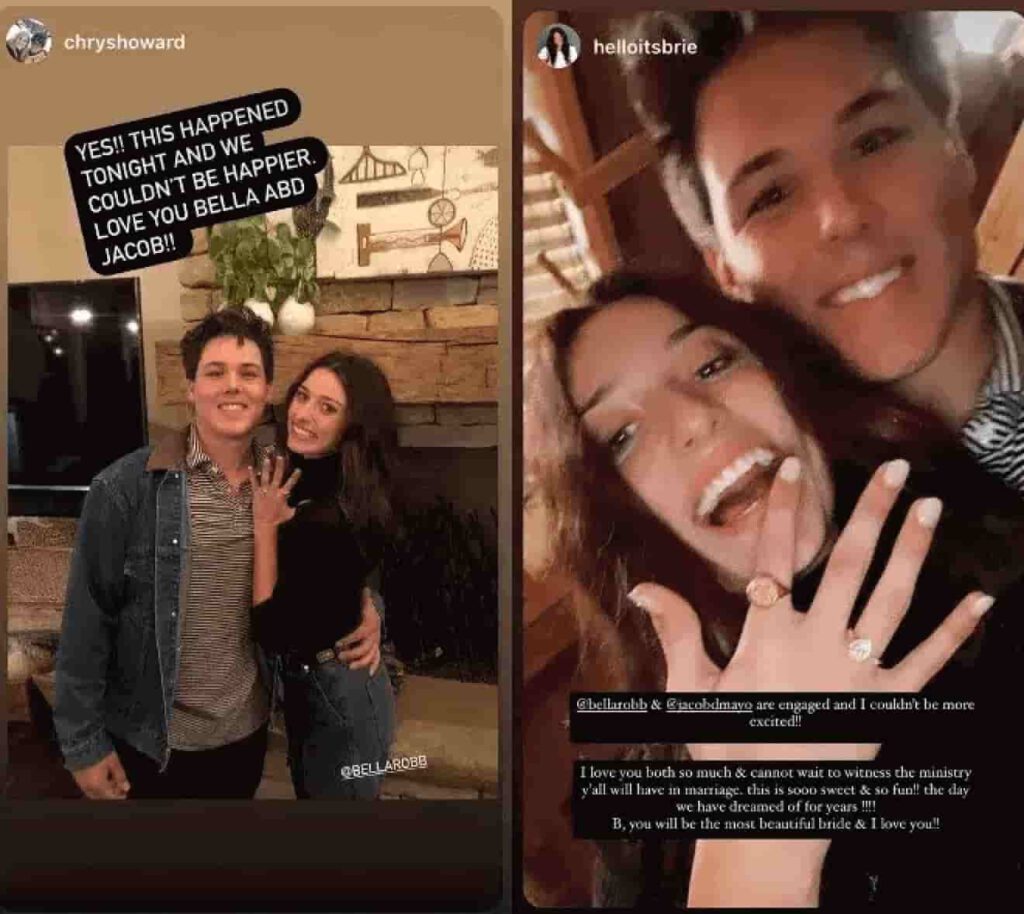 All the captions and shots were adorable and cute. They are true to each other because they only focus on their happiness, not criticism. As a society what we are doing to provide peace to the people? Peace is whatever you do you find happiness and purpose in that thing. We advise everyone about fighting their depression but somehow create such a situation for them so they feel insecure about their choices.

How Did Bella Robertson’s Parents Announce the News?

Bella’s parents took to Instagram to share the exciting news of their daughter. The 47 years old Korie posted a family photo on her Instagram. The photo is along with the huge note of congratulations to her daughter Belle Robertson.

Moreover, she wrote, our beautiful family is growing once again. “Our fam is growing again,” my daughter engages with Jacob last night and he is the sweetest man ever. Jacob, we love you and are so excited to welcome you into the fam.” She exposes her emotions to her little girl and that’s heartwarming.

No, Bella Robertson is not adopted. Korie and Willie are her parents, they are biological parents of Bella. They already have five kids. John Luke, Saddie, and Bella are biological siblings but Will and a foster daughter Rebecca are adopted.

How Much is Bella’s Worth?

Bella the star from the duck dynasty, and daughter of Willie Robertson, estimates to hold a net worth of $20000. She’s an actor and plays different roles in several TV shows.

What school does Bella Robertson go to?

Who is Rowdy Robertson?

He (Rowdy Robertson) is the adopted son of Willie and Korie Robertson. They adopt him officially in September of 2016.